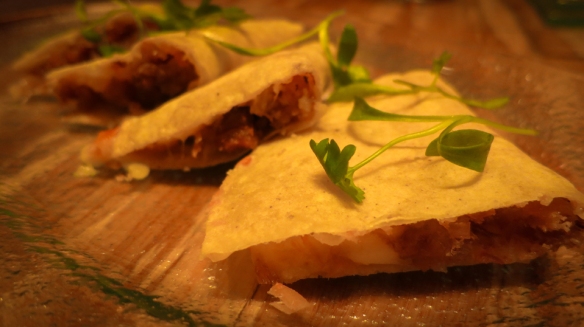 The first thing I ate this day was actually white rice from the Panda Express.  I hadn’t had lunch on the plane and I was starving.  It was so undercooked I couldn’t even eat it. 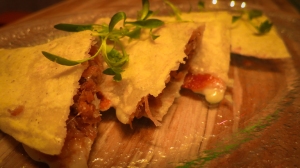 By the time we got settled in our hotel we were hungry again (well, I was hungry still).  I hadn’t made an itinerary like I should have, so we went to the concierge where we were staying and they suggested a Mexican/Chinese place called China Poblano.  I went through the rigamarole with the poor waiter (who really was trying to understand) and ordered the quesadilla de chicharron, which had just about the only meat that wasn’t marinated overnight.

It looked so good!  I was so excited to eat it!  And my first bite…had an onion in it!!!  What the hell?!!!  Thankfully I had taken two Digest Spectrum beforehand and suffered no repercussions.

Of course it was my fault because I didn’t follow any of my rules.

I did order a new quesadilla, and it was delicious.