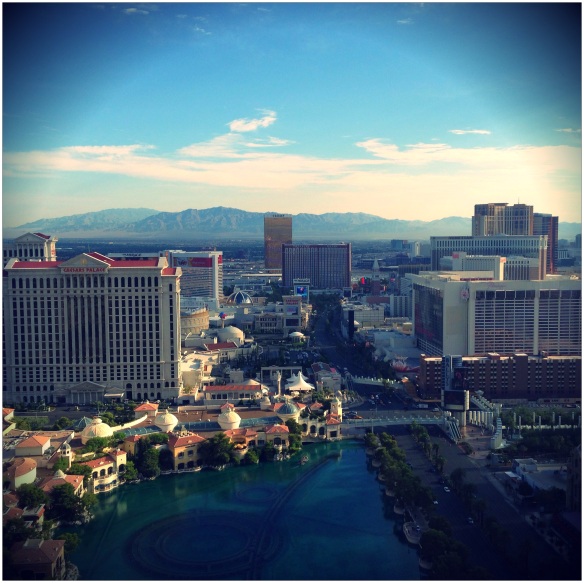 I only have one picture for today and it’s really crappy, so here’s one of the view from our hotel room!

I did something risky today: after coming off a high from a sale at Zara in the Fashion Show Mall, I went to Wendy’s and ordered some fries and chicken nuggets.  Now, the fries I’m pretty confident about being appropriate for my diet, but the nuggets were a gamble.  But I wanted them so bad!!!  I didn’t even get the 4-piece, I went right for 6.  As soon as I bit into the first one I KNEW there was onion powder in the breading (I looked it up, there isn’t), not to mention the wheat.  They were so good though!  I just love those nasty things.
And I’m glad to say nothing really happened.  Now I will probably eat them every day and become the fattest person in the world.

For dinner we went to a steak house that people there seem to hold in high regard.  It’s at the Circus Circus hotel.  That’s right, the hotel with the creepy clown on the sign with carpet that is probably covered in snot and pee from all the kids that are there.
But it was a classy joint!  It was super dark (that’s why my picture is so terrible) and it looked like a place you would go in the ’50s if you were in the mob or something.

I ordered a steak and potato, which is pretty fail-safe since usually only butter, salt, and pepper are used in cooking steaks.  This was, I think, the second best steak I ever had.  (First best was one I had in Tacoma, WA.)