The last day of our vacation.  As I said in my initial post, I did not do very well following the rules.  I could feel myself becoming more fatigued each day, but at least no stomach issues.

We went to lunch at The Society Cafe at the Encore.  I chose this one because it had 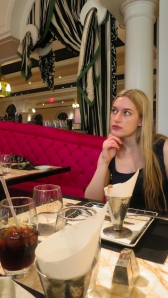 allergy menus available.  It was a really cute place, too!  It was decorated in black and white with pink accents in a Frenchy decor.
I ordered a burger and fries which was good, but at this point I was getting sick of red meat.

I was really looking forward to our dinner this night, but unfortunately it turned into kind of a mess.  We were going to Tender at the Luxor and there was a dish on the menu that was a wild game tasting from the Broken Arrow Ranch, which was featured on the first Bizarre Foods show I ever edited.  I thought it would be so cool to get to try food from a place I had a special connection with.

I had called ahead to talk to someone about my “special needs” and they said just to talk to someone when I got there and that they didn’t marinate their meats or anything.  I even brought my list of foods I could eat along!  So I talked to the waiter about it and showed him the list and he looks at it and then says “wow, that’s a long list.”  Um…what?  There are like, fifteen things on there that I can eat!  But then I realized: he thinks those are my allergies.  Because how is it possible that someone could eat so few foods, right?  My husband and I both tried to explain: “what I CAN eat.  CAN!  AM ABLE TO EAT!!!!”  But he just couldn’t grasp it (“can’t with a ‘T? Cannot eat?”)  We actually had two waiters, so the other came over and seemed to understand and I thought I was in good hands.  I said if it’s not on the list, I can’t have it.  Can’t with a ‘T.’

I was supposed to get three different meats, but it turned out one of them was marinated after all, so I got an extra piece of venison in its place.  But look at the rest of this dish: pearl onions by the venison; up in the left square is some kind of fig chutney; and then under the other meat (I can’t remember if that’s the antelope or wild boar) is something the waiter told me is “just a grain, don’t worry.”  That’s not on the list, guy.

So I just ate the meats, and the venison really needed the sauce that I couldn’t have.  At least the antelope/boar was OK.  But that was overall a pretty frustrating experience.  And one of the waiters stole my list!!!